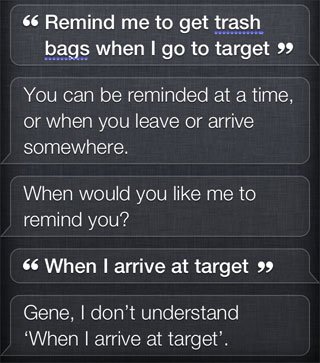 Siri can’t do nothin’… Yet.

The first dozen times I tried this, Apple’s new virtual assistant Siri was unable to help because of network issues — in fact, the first 36 hours I had the new iPhone 4S I was unable to get Siri to work. One assumes that, because the majority of Siri’s magic happens not on the phone but on some centralized server somewhere, the sudden influx of a million users trying out their new assistants overwhelmed the system.

When Siri finally began responding to requests, slowly and hesitantly, I tried the reminder again.

The first time, it appeared like it was going to work — I was excited when Siri responded that it was finding Target stores near me — but then it bugged out again.

When the system finally stabilized that night, that tantalizing search for stores was nowhere to be found. Siri couldn’t understand that I wanted a reminder when I arrived at Target. I found there was simply no way to get Siri to search for a place and then create a reminder for it.

It’s not just Siri. A look at the Reminders app reveals that it will only use locations that are saved within your contacts. You can set a reminder for when you leave or arrive at your home, your office, or your dad’s house. But unless you add your local Target location to your contacts, don’t expect to add a reminder that goes off when you reach the store. Reminders won’t use bookmarks in Maps, and more egregiously, won’t let you search for a location using maps. The entire world is available on the iPhone, including every Target store and it’s location — Siri will find one if you ask for the closest Target, but you can’t set a reminder there.

Here’s another example that shows a strange lack of logic: I asked Siri how old I am. It couldn’t answer that, despite the fact that my birthday, complete with year, is in my contact page; and Siri knows what today’s date is. Even the Mac OS built-in calendar application is intelligent enough to calculate the ages of people in my birthday calendar.

These are just a couple examples of the gaping holes I’ve found in the integration of iPhone technologies with Siri, which is admittedly in beta status. But until the underlying frameworks that share information are better fleshed out, Siri is only going to be as good as the weakest API.

Don’t get me wrong — there is much to like about Siri so far, not the least of which is its astonishingly accurate voice recognition (which I assume is due to its processing remotely).  With a ubiquitous Internet connection, Siri begins to fulfill the promise Apple made in the mid-90s with the Newton, and before that with “Knowledge Navigator.” It just needs more synapses and interconnections to use the information it already has access to in a more intelligent way.

Update, October 17: taking the logical step, I added my local Target address to my contacts, and suddenly Siri is able to respond appropriately to my request. Asking “remind me to pick up trash bags at target” resulted instantly in a reminder set for that location. So, at this point I’d have to anticipate the various places I go and add them to my contacts rather than expect Siri to search a map.

Ephemeral in a recorded world

I’m not sure if it’s the hills and mountains between me and the transmitter, but I just can’t get a listenable signal from KQED FM, the major public broadcaster here in the Bay Area. Thus, I  [more...]

This is a cigarette store in Campbell, California.

What you can’t see in this picture is the small white sign to the right of the door that reads “No Smoking.”

You’re drowning in it

I guess I should have known better than to watch it just because, after all, it was a TV movie of the week remake of The Posiedon Adventure. But right from the get go, it is already terrible because it is opening with a  [more...]