You’re going to read and hear a lot about Paul Ryan’s speech on Wednesday night. And I imagine most of it will be about how Ryan’s speech played—with the party loyalists in Tampa, with the television viewers across the country, and eventually with the swing voters who will decide the election.

I’d like to talk, instead, about what Ryan actually said—not because I find Ryan’s ideas objectionable, although I do, but because I thought he was so brazenly willing to twist the truth.

At least five times, Ryan misrepresented the facts. And while none of the statements were new, the context was. It’s one thing to hear them on a thirty-second television spot or even in a stump speech before a small crowd. It’s something else entirely to hear them in prime time address, as a vice presidential nominee is accepting his party’s nomination and speaking to the entire country. 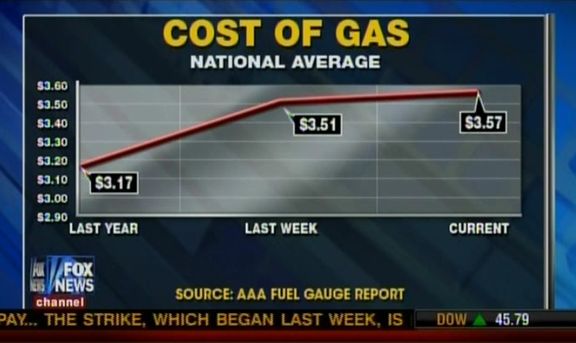 The Fox is in the Chart House

After generations of creating truth from lies, the conservatives have turned to Fox to do the same in a visual medium. Once again, the “news” channel uses deliberately misleading charts to lie to viewers.

Let’s send him in the first rocket

I guess he thinks it’s not enough to be remembered for making our country into a police state; or to have introduced the “pre-emptive war.” It’s not enough that he’s trying to get the  [more...]

Why have people become so stupid?

I will say one thing for the Bush administration: they are master manipulators. Every day I stand mouth agape at the latest fish story they have managed to get the American people to believe. The majority of Americans  [more...]