My habit of sticking interesting websites into my Mac’s dock often results in dozens of icons, each making the dock smaller and smaller until it becomes a tiny strip of little blurry smudges at the bottom of my screen. So, to clean out the clutter, here’s a list of the items that I’ve collected over the last month, in no particular order.

– The Iraq-o-Meter
– “A Medium Meets It’s War”: an article on how the Internet is becoming the preferred source for news
– A Flash Tribute to Ray Harryhausen
– Too Stupid to be President
– Wired News “Media Watchdogs Caught Napping” talks about the exodus of American internet users searching for news from other countries and sources
– Strawberry Pop-Tart Blow Torches
– Things Going Squish on a Scanner
– The End of the Concorde: I made an entry some time ago about the end of supersonic flight and the triumph of mediocrity. Sad that we no longer strive for the limits, but just settle for what is economically advantageous.
– All Songs Considered: The Lost Beatles
– Privacy International’s Stupid Security competition
– Flag-o-Rama! If you don’t own this stuff, you’re probably a terrorist.
– The News in Latin
– An article in Kiplinger’s magazine on HDTV, for which I was interviewed.
– Mass Hysteria: The Windshield Pitting Outbreak in Washington, 1954
– Wired News: “Does the End Justify the Means?” An article on Internet censorship.
– Aha’s Morten Harkett – still as cute as he was in the 80s.
– Arlington County news digest, including information about the CERT group I was in and a quote from me that I don’t remember making.
– The Catalogue of UK Entrances to Hell
– Pictures of the Centralia, PA coal fire (that’s been burning since 1961).
– Moonbelly.net: just a cute guy.
– NPR Radio Expedition: Trinity, the first atomic bomb site.
– The Smoking Gun: CNN’s just-in-case obituaries
– Human Rights Campaign Corporate Equality Index
– Reverse Speech: insight into the unconcious mind?
– Ready.gov parodies: helping America prepare for a fiery death. Stay away from Austin. Do not lie in smoking rubble.
– The Adventures of AccordianGuy: the Japanese Butt-Skirt
– The Washington Blade Viewpoint: ” If Bill O’Reilly and Fox Network’s idea of normal sexual relations is promiscuity, exhibitionism, and the public picking your mate, then we ‘aberrant’ homosexuals hold the moral high ground.”
– The Acme Heart Maker: make your own candy hearts.
– Flooble Business Reply: generate a reply to the Nigerian scam e-mail.
– NPR’s Morning Edition: “Teaching Patriotism in Time of War” featured resources from my employer, NCSS.

Whew! I can see my dock icons again! 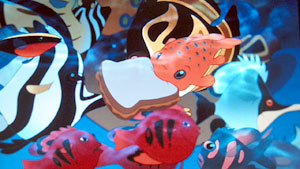 I’m only a half hour into watching “Lilo and Stitch,” and I am pretty close to declaring this one of my favorite movies ever. It’s so witty, adorable, and charming! Disney needs to make more of  [more...]

Because I’m a detail-oriented, wanna-be set designer, allow me to clue you in on some of the magical wonder destinations available in Willy Wonka’s Glass Elevator, courtesy of my anal-retentive freeze  [more...]

A couple of the jokes from last Saturday’s Gridiron Club dinner. From Hillary Clinton: “In the Clinton administration, we used to say in eight years, we’ve added more than 22 million new jobs,”  [more...]