Me am bizarro president

The new strategery of a “kinder, gentler” rhetoric continues with this interesting and out-of-character quote:

WASHINGTON (Reuters) – President Bush on Saturday described John Kerry’s tour of duty in Vietnam as more heroic than his own service in the Air National Guard, saying his Democratic rival had been “in harm’s way.”

But the president told NBC’s “Today” show that both sides should drop the debate over their wartime service, saying, “I think that we ought to move beyond the past. … The real question is who best to lead us forward.”

Asked if he believed that he and Kerry “served on the same level of heroism,” Bush replied, “No, I don’t. I think him going to Vietnam was more heroic than my flying fighter jets. He was in harm’s way and I wasn’t.”

If the Bush campaign tries to portray Kerry as a “flip flopper” again, we can trot this sudden change of heart out. Karl Rove has all the subtlety of Madonna when it comes to changing personas. How many people will buy the new, kind Bush? After all, we saw what he did to people like John McCain 4 years ago in the midst of claiming to be a nice guy. And add in the last 4 years of his — in some ways, brutal — administration. Does anyone really believe anything in a campaign anymore?

Frank Meeks, who owned the Domino’s pizza franchise here in the Washington metro area, has died. Meeks got a lot of praise as the best Domino’s owner in the country, but his politics (and crappy pizza) means  [more...] 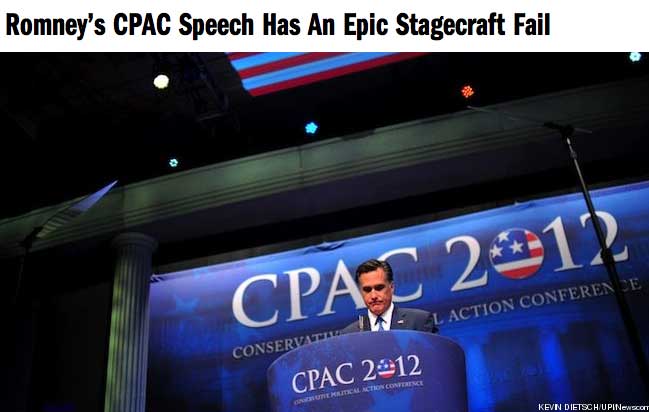 RT @evanmc_s: Romney attacking Obama over fake columns in Denver again. Here’s a pic of Romney talking in front of fake columns Like all the high-profile speakers before him, Romney delivered his address from the  [more...]

Poke ‘em with a stick, why dontcha?