Vote Early… you know the rest

In These Times has an article about the election and the strange occurrence therein: the exit polls that said Kerry would win. It clearly points out that the discrepancy was suspicious, and that exit polls are much more reliable than voting machines that have no verification function.

Recall the Election Day exit polls that suggested John Kerry had won a convincing victory? The media readily dismissed those polls and little has been heard about them since.

Many Americans, however, were suspicious. Although President Bush prevailed by 3 million votes in the official, tallied vote count, exit polls had projected a margin of victory of 5 million votes for Kerry. This unexplained 8 million vote discrepancy between the election night exit polls and the official count should raise a Chinese May Day of red flags.

The U.S. voting system is more vulnerable to manipulation than most Americans realize. Technologies such as electronic voting machines provide no confirmation that votes are counted as cast, and highly partisan election officials have the power to suppress votes and otherwise distort the count.

… The exit polls themselves are a strong indicator of a corrupted election. Moreover, the exit poll discrepancy must be interpreted in the context of more than 100,000 officially logged reports of irregularities during Election Day 2004. For many Americans, if not most, mass-scale fraud in a U.S. presidential election is an unthinkable possibility. But taken together, the allegations, the subsequently documented irregularities, systematic vulnerabilities, and implausible numbers suggest a coherent story of fraud and deceit.

What’s more, the exit poll disparity doesn’t tell the whole story. It doesn’t count those voters who were disenfranchised before they even got to the polls. The voting machine shortages in Democratic districts, the fraudulent felony purges of voter rolls, the barriers to registration, and the unmailed, lost, or cavalierly rejected absentee ballots all represent distortions to the vote count above and beyond what is measured by the exit poll disparity. The exit polls, by design, sample only those voters who have already overcome these hurdles.

One of the comments on this article is fascinating, once of those carefully detailed fact-by-fact lists that conspiracy theorists are so fond of. It’s compelling information; and while I do believe that Republicans rigged the election, the unfortunate truth is that we’ll never know for sure and no one will ever be able to change the outcome now. The list is after the jump.

20 Amazing Facts About Voting in the USA
Did you know….
1.80% of all votes in America are counted by only two companies: Diebold and ES&S.
http://www.onlinejournal.com/evoting/042804Landes/04280 04landes.html http://en.wikipedia.org/wiki/Diebold
2.There is no federal agency with regulatory authority or oversight of the U.S. voting machine industry. http://www.commondreams.org/views02/0916-04.htm
http://www.onlinejournal.com/evoting/042804Landes/04280 04landes.html
3.The vice-president of Diebold and the president of ES&S are brothers. http://www.americanfreepress.net/html/private_company.html
http://www.onlinejournal.com/evoting/042804Landes/04280 04landes.html
4.The chairman and CEO of Diebold is a major Bush campaign organizer and donor who wrote in 2003 that he was “committed to helping Ohio deliver its electoral votes to the president next year.”
http://www.cbsnews.com/stories/2004/07/28/sunday/main63 32436.shtml
http://www.wishtv.com/Global/story.asp?S=1647886
5.Republican Senator Chuck Hagel used to be chairman of ES&S. He became Senator based on votes counted by ES&S machines.
http://www.motherjones.com/commentary/columns/2004/03/0 03_200.html
http://www.onlinejournal.com/evoting/031004Fitrakis/031 1004fitrakis.html
6.Republican Senator Chuck Hagel, long-connected with the Bush family, was recently caught lying about his ownership of ES&S by the Senate Ethics Committee.
http://www.blackboxvoting.com/modules.php?name=News& p;file=article&sid=26
http://www.blackboxvoting.com/modules.php?name=News& p;file=article&s i d=26 http://www.hillnews.com/news/012903/hagel.aspx http://www.onlisareinsradar.com/archives/000896.php
7.Senator Chuck Hagel was on a short list of George W. Bush’s vice-presidential candidates. http://www.businessweek.com/2000/00_28/b3689130.htm http://theindependent.com/stories/052700/new_hagel27.html
8.ES&S is the largest voting machine manufacturer in the U.S. and counts almost 60% of all U.S. votes. http://www.essvote.com/HTML/about/about.html
http://www.onlinejournal.com/evoting/042804Landes/04280 04landes.html
9.Diebold’s new touch screen voting machines have no paper trail of any votes. In other words, there is no way to verify that the data coming out of the machine is the same as what was legitimately put in by voters. http://www.commondreams.org/views04/0225-05.htm
http://www.itworld.com/Tech/2987/041020evotestates/pfin ndex.html
10.Diebold also makes ATMs, checkout scanners, and ticket machines, all of which log each transaction and can generate a paper trail.
http://www.commondreams.org/views04/0225-05.htm
http://www.diebold.com/solutions/default.htm
11.Diebold is based in Ohio. http://www.diebold.com/aboutus/ataglance/default.htm
12.Diebold employed 5 convicted felons as senior managers and developers to help write the central compiler computer code that counted
50% of the votes in 30 states.
http://www.wired.com/news/evote/0,2645,61640,00.html
http://portland.indymedia.org/en/2004/10/301469.shtml
13.Jeff Dean, Diebold’s Senior Vice-President and senior programmer on Diebold’s central compiler code, was convicted of 23 counts of felony theft in the first degree.
http://www.chuckherrin.com/HackthevoteFAQ.htm#how
http://www.blackboxvoting.org/bbv_chapter-8.pdf
14.Diebold Senior Vice-President Jeff Dean was convicted of planting back doors in his software and using a “high degree of sophistication” to evade detection over a period of 2 years. http://www.chuckherrin.com/HackthevoteFAQ.htm#how
http://www.blackboxvoting.org/bbv_chapter-8.pdf
15.None of the international election observers were allowed in the polls in Ohio. http://www.globalexchange.org/update/press/2638.html
http://www.enquirer.com/editions/2004/10/26/loc_elexoh.html
16.California banned the use of Diebold machines because the security was so bad. Despite Diebold’s claims that the audit logs could not be hacked, a chimpanzee was able to do it. (See the movie here blackboxvoting.org/baxter/baxterVPR.mov .) http://wired.com/news/evote/0,2645,63298,00.html http://www.msnbc.msn.com/id/4874190
17.30% of all U.S. votes are carried out on unverifiable touch screen voting machines with no paper trail.
http://www.cbsnews.com/stories/2004/07/28/sunday/main63 32436.shtml
18.All – not some – but all the voting machine errors detected and reported in Florida went in favor of Bush or Republican candidates. http://www.wired.com/news/evote/0,2645,65757,00.html
http://www.rise4news.net/extravotes.html
http://www.ilcaonline.org/modules.php?op=modload&na ame=News&file=article&sid=950
http://www.ilcaonline.org/modules.php?op=modload&na ame=News&file=article&sid=950 http://www.scoop.co.nz/mason/stories/HL0411/S00227.htm
19.The governor of the state of Florida, Jeb Bush, is the President’s brother.
http://www.tallahassee.com/mld/tallahassee/news/local/7 7628725.htm
http://www.washingtonpost.com/wp-dyn/articles/A10544-20 004Oct29.html
20.Serious voting anomalies in Florida – again always favoring Bush – have been mathematically demonstrated and experts are recommending further investigation.
http://www.computerworld.com/governmenttopics/governmen nt/policy/story/0,10801,97614,00.html
http://www.uscountvotes.org/

Maybe the cue cards were fuzzy

Meanwhile, the figurehead at the top of the conservative agenda continues to show that he’s the Oaf of Office: President Bush tucked a rather startling revelation into the middle of his news conference Wednesday  [more...] 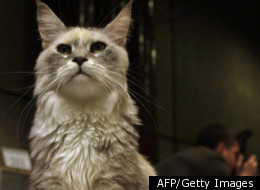 And the conservatives are the ones who whine about being “threatened” for voicing their hatred.

This morning, I was nudged awake by the sun making its way through my window… and the afterburners of a military jet overhead.
Welcome to the forbidden city.