It is perhaps not too surprising that President Bush has now decided — after due deliberation by Karl Rove, no doubt — to call for an “investigation” of sorts into possible price gouging by oil companies. It’s also not so surprising that he is stopping deposits into the strategic oil reserve, although he still hasn’t released any of its holdings, something that Republicans insisted that Bill Clinton should have done back when gas hit $1.50.
Blah, blah, blah — yeah, there’s a mid-term election coming up, in which it is widely expected that the Republicans will be taken out of power after a relatively short 10 years of complete corruption, something that all the pundits love to point out took the Democrats about 30 years to achieve. Well, we all know that Republicans are far more organized than the Dems, so this is hardly a shock.
Anyway, here’s something about the oil situation that kind of pisses me off (what, only one thing?): the president and his hangers on are saying that the oil companies should use their record profits to build more refineries and increase gasoline production. But think about that for a moment. Oil is a finite resource, and there are many people who believe we have now reached the point of “peak oil” — a time when we have reached the cheapest oil, and from here on out it will be more and more expensive to get… and fierce competition for what’s left will lead to wars, unaffordable prices, and eventually the collapse of civilizations dependent on oil — like ours.
And by plowing those profits into increasing production, they’re just hastening the inevitable. There’s a limited amount out there, so we should start using more?
Does anyone else think that oil companies should use those enormous profits to begin creating the infrastructure of a new energy source. whether it hydrogen or ethanol or something else? Can you imagine how far billions of dollars would go in creating efficient production methods of hydrogen?

In contrast to Fox’s Soviet-style airbrushing of Wonderfalls from its website, NBC seems to let the dead linger.

McDonald’s has announced that they are phasing out “supersize” fries and drinks… they claim it’s part of their plan to “simplify its menu and give customers choices that support a  [more...] 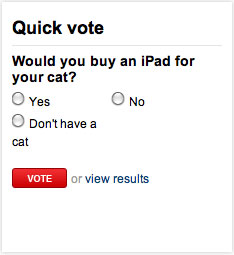 This is from the home page of a major news network.
If journalists really needed a poll to gauge public opinion, they wouldn’t use something as unscientific as a website vote widget.
Is this a joke?