All Along the Watchtower

If you haven’t seen the mid-season finale of Battlestar Galactica yet, read no further. Spoilers there be, matey.

If you haven’t seen the mid-season finale of Battlestar Galactica yet, read no further. Spoilers there be, matey.

So, at the end of the episode our intrepid heroes are standing in a ruined wasteland, and when the camera pans it becomes apparent that they are standing in Brooklyn. Holy Planet of the Apes, Batman! Of course, it’s just sort of an impression of Brooklyn, so we can’t be sure of it.
It was only natural for me to fire up Google Earth to take a look at what might be in that spot. In the show there is a ruin that looks like the Temple of Pythia; I wanted to see if there was some comparable circular structure in Brooklyn in real life. Turns out there isn’t. But I did discover something far more interesting. At that spot just west of the Brooklyn Bridge where the Galactica crew were standing is the headquarters for the Jehovah’s Witnesses. And the name of that building is far more than a simple coincidence.

The building at 25 Columbia Heights is named “Watchtower”. As you recall, the four Cylons aboard Galactica were revealed after they all heard the song “Along the Watchtower” playing in their heads. That plot point was reinforced again in last night’s finale.

A few interesting lines from the Wikipedia entry on Jehovah’s Witnesses:

The vast majority of Jehovah’s Witnesses expect to live on a renewed paradise on Earth.

Witnesses believe that during the imminent war of Armageddon, the wicked will be destroyed, and survivors, along with millions of others who will be resurrected, will form a new earthly society ruled by a heavenly government and have the possibility of living forever in an earthly paradise.

The Witness contend that the Bible has always condemned the mixing of religions because there can only be one truth from God. They believe that all other religions fail to meet all the requirements set by God and will be done away with.

Made especially for you

Who sewed your shirt? Harvested your coffee? Picked your tomatoes?

Moving in the 21st Century

A new computer is like a new house: it takes careful planning and a lot of work to move into it. 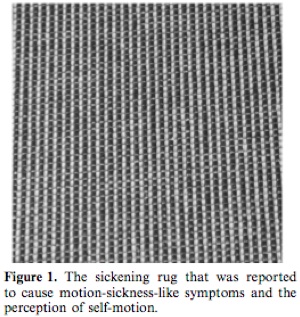 Make your guests ill with a nausea-inducing floor rug

I've seen plenty of home furnishings that made me nauseated, but I didn't know there was funding available to study it.