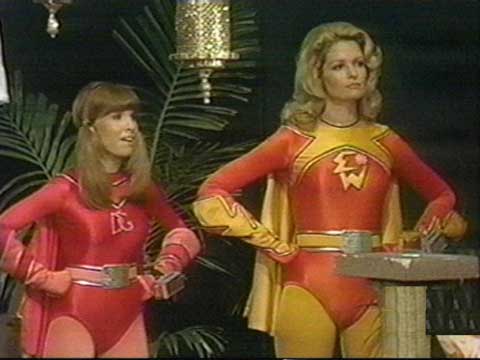 Just a few questions about the life these girls lead…

I don’t know how it started, but that song stuck in my head this morning in the shower.

Electrawoman and Dynagirl, fighting all evil schemes!
Each writes for a magazine, hiding the life she leads!

Then the questions started.
Each writes for a magazine. What magazine? Do they both work at the same magazine? ‘Cos it seems likely. Perhaps they met there.
Hiding the life she leads? Well… it’s probably pretty hard to hide those 5 pound boxes on their wrists. How do they explain those? And when they both keep leaving work together at all times of day, where do people think they’re going? Maybe they think there’s more than just journalism going on between them. What kind of magazine was it again?

Summoned to Electrabase by Electracomps they wear…
Ah, Frank.
Did you ever notice that he never leaves the Electrabase, and never changes his clothes? One moth-eaten sweater is all he seems to own.
Which makes some kind of sense, since it doesn’t seem like any of them get paid. Who is running this outfit? Is Frank the boss? Where is this Electrabase? Is it in Laurie’s basement? Maybe she’s the boss, and Frank is her slave in some strange fetish scene.

And where do all these villains come from, the ones who wear wacky costumes and wander about unnoticed in what I can only assume is Southern California?

Next week, we’ll ask the burning question: what exactly is happening in this old man’s RV?

Puns are the lowest form of humor

I want to make a joke here, but I’m too exhausted emotionally and physically from trying to make sense of things. Just a few little tidbits, then, which you can craft your own jokes from: – Coalition of the  [more...]

Another year, another design

I have a nagging itch in my head to redesign this blog. You know, I design things for a living, but I can’t ever seem to come up with just the perfect look for my own stuff. So I think, since I will most probably  [more...]

If I can manage to shake this creeping depression — this morning I laid in bed feeling alone and scared until after 9am — I have a long list of things to do. Since I’m currently unemployed except for  [more...]