There seems to be no end to the animal stories. Among today’s:

German police arrest cow
Police in Germany have formally arrested a cow after it strayed on to a motorway.
Drivers on the A7 motorway near Neumuenster called police after seeing the animal on the road.
Officers found the cow in a row of bushes alongside the motorway. It took them 30 minutes and the help of a local farmer to catch it.
Since they had no other vehicle to transport the cow in, they officially declared it arrested.
Spokesman Ruediger Schwarz described the act as a “legal trick”.
It meant officers could call for a prisoner transport van from a nearby police department.
They coaxed the cow into it and managed to take her to a nearby farm for the night.
The search for the owner of the cow continues.

New Zealand to tax cattle flatulence
New Zealand farmers are angry after the government announced plans to tax the flatulence of their livestock.
Farmers face a levy of up to 25p a head on cattle and 3p on each sheep as part of the government’s policy to combat global warming.
Methane from the animals’ belching from the grass they munch, and nitrous oxide from their dung and urine accounts for more than half of all New Zealand’s greenhouse gas emissions.
The government will spend the tax it collects from the flatulent animals on researching ways to make them less windy.
Farmers accused the government of a political sleight of hand in making them pay for research after promising the agricultural sector would be exempted from emission charges.
Federated Farmers’ president Tom Lambie complains New Zealand is the only country to impose a levy like this on its farmers.

Swiss police spend an hour trying to catch toy snake
Police in Switzerland called out to dispose of a deadly Mamba snake took an hour to realise it was only a rubber toy.
The “snake” was spotted in a well by residents in Allschwil near Basel who then called the police.
that it was not one of the slow-worms resident to the area, officers mistook the long green snake for a deadly African Mamba.
But after poking the reptile with a long stick it was revealed that the fatal animal was nothing more than a rubber toy.
A police spokesman said: “The light in the well was poor and from where we were standing it looked real. Luckily we were able to determine that it wasn’t dangerous before unnecessarily calling the experts in.”

Bee blamed for car crash
A bee that flew up a motorist’s trouser leg is being blamed for a car crash that caused more than £7,000 of damage.
The driver, from Mockmuhl in Germany, told police he lost control of the car and swerved into oncoming traffic when he tried to free the bumble bee from his trousers.
No one was injured in the crash, but two cars were badly damaged.
A police spokesman said, however, that they were still investigating the crash as the bee had “mysteriously disappeared” after the accident.

Man faces charges for keeping fawn on balcony
A German man is facing charges for keeping a fawn on his balcony.
Police in Bremen received reports from neighbours that an animal was being kept on the balcony on a leash.
When they searched the man’s flat, a small fawn turned out to be living on his balcony.
It was tame and was nibbling on the leaves of some branches.
The man, aged 42, told police he’d found the animal during his work for a landscape gardening film.
He said he hadn’t yet had the time to inform authorities. He is now facing charges for poaching.
The fawn was handed over to a gamekeeper who will raise it to make sure it can later be set free and survive in the wild again.

A lot of time and effort has gone into television production to try to make the fluid motion of video look like film. The differing frame rates of video and film make converting between the two fraught with mathematics:  [more...] 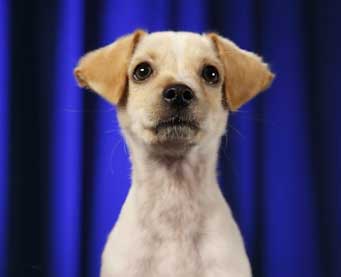 Not into football? Check out the Puppy Bowl starting lineup

“Honey, are you doing drugs? Todd Bridges is on the phone.”

Earlier this week, my phone company’s voice mail system called me to remind me of my own birthday (today, for those of you who shamefully forgot to order those roses… or that Sony plasma TV I was looking at)  [more...]