End of the phone company? I don’t think so

In Business 2.0, Erick Schonfeld opines that Apple’s iChat AV will mean the end for phone companies:

The folks who should be the most worried about this development are the phone companies. While video IM works only on broadband connections, voice IM is possible on a dial-up modem. As more people adopt broadband and the voice and video quality improves, instant messaging could become an increasingly appealing alternative. If I can talk to my friends and family for free using a souped-up computer, why would I ever pick up the phone?

There’s only one problem with his logic – your dial-up modem is connecting via a phone line, which you’re still paying for. It doesn’t cost any less because you’re using it for data – so, you’re still picking up the phone. In fact, you’re playing for both the phone line and the internet service, so you’re paying more for the chat than if you just picked up the phone and called. The phone companies are in no danger at all. 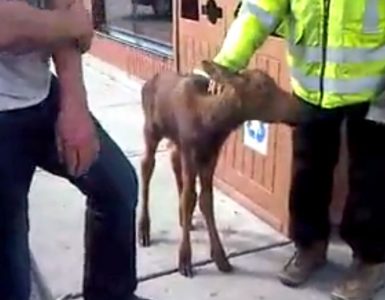 This couldn’t possibly be any more Canadian unless Catherine O’Hara was involved.

You know how when you open a stack in the Mac OS X dock, and you get this nice curvy fan of files? Doesn’t it look suspiciously like an interface that would work well on a device you hold in two hands and operate  [more...]

English as a first language

We all know that the English-speakin’ world is divided by a common language. Luckily, there’s now a translation utility designed to bridge that gap: Babel Bloody lilian gish translates English to its  [more...]