I guess that the Fox News viewer has a short attention span. From the New York Times:

At 5:30 p.m. last Monday, Shepard Smith, the 40-year-old host of Fox News Channel’s “Fox Report,” was hunched over his computer in the company’s bustling Midtown headquarters, poring over the script for his evening broadcast, and searching for verbs. Mr. Smith, let it be known, does not like verbs. Whenever he finds one, he crinkles his brow in disgust like a man who has discovered a dribble of food on his tie. He taps furiously at his keyboard, moves the cursor to the offending word and deletes it, or else adds “ing,” turning the verb into a participle and his script into the strange shorthand that passes for English these days on cable news:

“Texas! A school bus and two other vehicles colliding in Dallas. The bus rolling over on its side.”

“Outrage in the Middle East! A vow of revenge after an assassination and reportedly threatening the United States. Tonight — how real the threat?”

Shepard Smith! Explaining to a reporter, why not the verbs?

“We don’t communicate in full sentences anyway,” Mr. Smith said as he continued working through his script. “We don’t need all those words. And it allows us to go faster.”

The new television season is upon us, and with it are yet more attempts to create networks. “The WB” and UPN are gone, replaced by “The CW”. Stations that lost their network affiliation in that  [more...]

Keep us in suspense

You know what I really hate these days? I’ll tell you after the jump. I really hate it when blogs put the really interesting part of the post after a jump, just so that they can get a few more ad impressions  [more...] 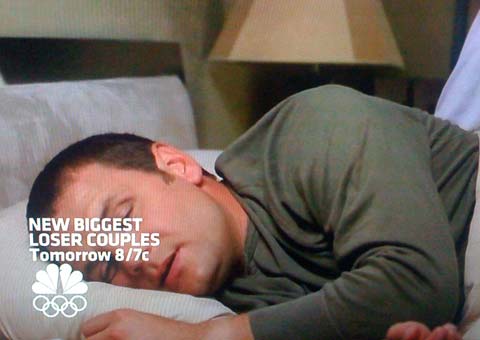 No, those network bugs and always-on promos aren’t too noticeable and don’t ever get in the way of watching a program. Of course not.