We can swim, Randall

Sometimes I find the right wing fundamentalist comments gut-wrenchingly hilarious. Like this one from Randall Terry, the hate-filled leader of “Operation Witness” — you know, that gang of obnoxious assholes who stand outside family planning clinics and scream at terrified women. He claims to have 100,000 members, and seems to think that they’ll somehow be in the majority at Sunday’s March for Women’s Lives:
“I don’t know if they were taking stupid pills or what, but their entire march must proceed through an ocean, a gantlet of pro-life signs, banners, pictures of unborn babies and [of] women who have had abortions and are now fighting to overturn Roe v. Wade,” Terry said.
I’ll be there, Randall. Me and Sara and Lily and Jen and about 696,000 other people who think that women are more than vessels for men’s progeny. So, Randall, as your fundie pals says, “bring it on.”

Meanwhile, Terry’s adopted son Jamiel has come out of the closet and has a story to tell.

He wrote his article, he says, to help children of Christian fundamentalists deal with their own sexuality. Maybe he also wrote to help his father understand him. Or maybe he wrote to make him understand something else.

A few years back, Randall Terry divorced his wife, Cindy — who once said her husband was touched by the divine — and married a much younger woman. (Terry’s ex barely speaks to him anymore.) Their four children say they still love their father but the relationship has frayed. Terry recently barred one of his adopted teenage daughters from his house after she got pregnant out of wedlock for the second time. Another adopted daughter also became pregnant as a teenager and later converted to Islam, a religion Terry has described as composed of “murderers” and “terrorists.” (The couple’s lone biological child, a daughter, is in college.)

The night before Jamiel’s interview with The Washington Post, Randall Terry drove seven hours from his Florida home to visit Jamiel in Charlotte. Theirs was not a pleasant talk. Why, Randall demanded, didn’t you tell me you were thinking of writing this and committing an act of betrayal? I could have helped you with a Christian cure for homosexuality.

Jamiel hikes his eyebrows as he recalls the conversation. “I told him: ‘Dad, how was I supposed to tell you? Look at who you are.’ “
What does it say about Terry that he can’t understand his own children? That they can’t be around him? How about this, from an article that Terry wrote about his own son:

The Terrys rescued Jamiel from a very dark home. Jamiel was born in jail, a victim of “crimes and treacheries” too terrible to spell out (if not too terrible for a father to hint at). Jamiel is a liar who’s led a double life.

“My son’s life,” Randall wrote, “is a shambles.”
And you certainly didn’t make it better, dad.

Terry Randall is just a horrible, hate-filled, brain-damaged asshole of the first degree. If I see him on Sunday, it’ll be a real challenge to not run over to him and beat the shit out of him with my bare fists. 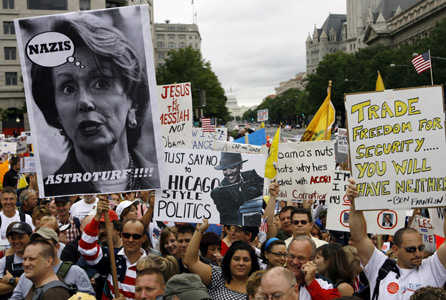 Can’t quite figure out who they’re protesting against

See the guy on the right with the Benjamin Franklin quote?
Where the hell was his protest during the Bush administration?

I think they got “reduce” mixed up with “expand”

I have absolutely no intention of listening to George Bush’s State of the Union speech; in fact, I often go out of my way to avoid hearing that howler monkey’s irritating drawl. But I did read a bit of what  [more...]