NBC gets a “D” for their high definition coverage of the 2004 Olympic Games. Yeah, the pictures were lovely. But a few very important components of their coverage just ruined it.
First, the commentators. They brought out the fourth string people here, and it really shows. Their inane commentary was incredibly annoying and disruptive. “I don’t know which is better, seeing it live in the stadium or these pictures!” Well, I’d pick the stadium, because then I wouldn’t have to hear you.
Second, the production values. They’re using the same graphics that they used in 2002 and 2000. I can’t believe that the technology for overlaying more sophisticated graphics onto a high def picture hasn’t penetrated NBC’s lofty productions suites. They’ve had 4 years to get ready for these games!
Third, the commercial. Yes, the commercial. They’ve run a single Sony commercial during every break. As much as I despise commercials, this repetitive annoyance makes me yearn for a variety of ads. And the breaks, which came often, were sometimes up to 4 or 5 minutes long, filled with helicopter footage of Athens and the Olympic theme music, awkwardly looped over and over. I found myself screaming at the set for them to go back to coverage! Why are we watching stock footage over and over?
Fourth, and most important, the delay. The Games were already a day late by the time analog viewers saw them, but if you were watching on HD, you had to wait another day! The opening ceremonies were shown about an hour later than the ones on the analog channel; but it went downhill from there to this point: the closing ceremonies were shown in HD at 4am this morning. Since almost nobody has the capability to record HD yet, they kindly reran it… at 8am. Needless to say, I missed it.
In the end, it’s obvious what NBC’s goal was for their HD broadcasts. They were intended to be shown in television stores to promote the sale of HD sets. Just yesterday, I was at a store where the Olympics in HD was playing on all the sets.
It was definitely not designed for home viewing. At least, I hope not — wouldn’t want someone to throw a remote at their expensive HD set.

I turned on the closing ceremonies before heading to work. They showed the first half hour, then interrupted with NBC promos, then 5 minutes of the Olympic theme and snippets of stock footage, and now they’re showing a kind of retrospective of the games, with commentary praising the high definition coverage. Meanwhile, I’m waiting for them to go back to the &%@*#!! closing ceremony! I think there is just some horrible disease in American television that prevents them from showing any event in it’s entirety, uninterrupted, and without commentary. Everything, everything has to be packaged and processed, from cheese to television.

Dell has just released what’s being called their response to the Apple iBook. Guys, the iBook has been around for about 4 years or so, and you’re just responding now? Problem with this new notebook is that  [more...]

A matter of degree

This morning when I perused the Mercury News, I was alerted by a red box at the top where the weather forecast lives. Severe Weather, it said. Wow… what’s going on, I wondered? Clicking it led me to this  [more...] 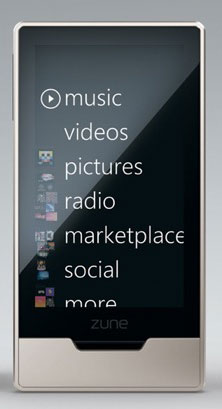 This is the new Zune HD. Even iPod devotees are calling it "sexy."
Me? The first thing I noticed is that Microsoft couldn't do something as simple as sizing text to fit the width of the screen.