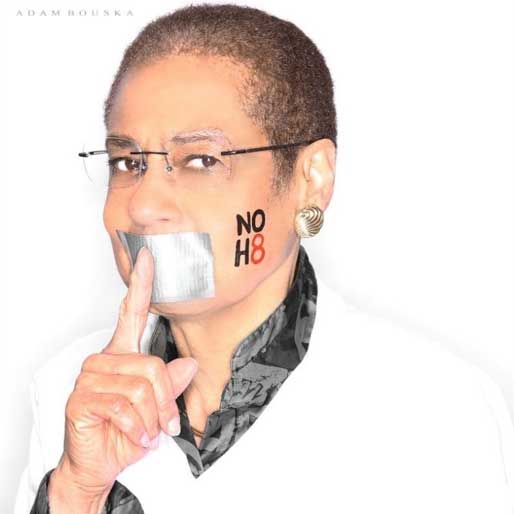 On Feb. 15 Adam Bouska, Jeff Parshley, and Laurence Watts brought “NOH8 on the Hill,” to Congress. By the end of the day, 10 members of Congress had posed for NOH8 portraits. This “exceeded their wildest expectations.”

On Feb. 15 Adam Bouska, Jeff Parshley, and I [Laurence Watts] were in Washington, D.C. for “NOH8 on the Hill,” the exclusive NOH8 photo session we set up especially for members of Congress. We thought we might be able to persuade a couple of Congressmen to take part. This is an election year, after all. What actually happened exceeded our wildest expectations.

By the end of the day, 10 members of Congress had posed for NOH8 portraits. Ten! [via Huffington Post]

I’d like to point out that there are 535 members of Congress if you include the Senate. Five hundred thirty five. And only ten of them thought that it was important to be counted as being against bigotry and hate. It goes without saying that there were no Republicans among those ten, there were no Senators (although it isn’t clear that they were asked) and one of the ten isn’t even allowed to cast a “real” vote because she represents the disenfranchised District of Columbia.

This exceeded wildest expectations? I think that this shows how wildly low expectations of simple humanity have fallen in today’s political environment. Adam, Jeff and Laurence may be happy, but I am frankly disgusted and apalled.

For the record, the members of Congress who took part are:

Rod Paige, the secretary of education is the next one to go. I’m not one of his fans really, but as the Bush administration doesn’t allow cabinet secretaries to actually formulate any policy, I shrug my  [more...]

I can imagine why there are some Republicans who are uneasy with the campaign to recall California’s Democratic (and increasingly unpopular) Governor Davis. The recall effort is being pushed by a shockingly  [more...]

Mark Murford sums up the salient points about the Bush administration’s response to Katrina quickly, to the point, with the right amount of sarcasm and without the crush of every little detail that would obscure  [more...]