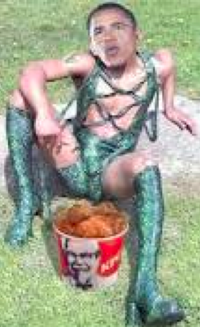 This image isn’t clear, but it doesn’t need to be for readers to understand what the conservative John Locke Foundation meant when it included this racist and homophobic picture in a post blasting President Obama’s campaign for opposing a proposed North Carolina ban on gay marriage. But, just in case you can’t tell, there’s the commander-in-chief, dressed in poorly designed drag and eating Kentucky Fried Chicken. Very mature, right?

“Out of no where, President Obama suddenly feels the need to declare his objection to North Carolina’s pending vote to ban on gay marriage,” former radio host Tara Servatius writes in the post, called “Obama Goes Pro Gay Marriage to Get NC on Election Day.”

The John Locke Foundation is funded in large part by conservative millionaire Art Pope, which is why the website Art Pope Exposed managed to catch the racist, homophobic image, called “Obama Gay” before the Foundation took it down. [Towleroad]

Where are all those politicians who embraced putting Ronald Reagan on every school, municipal building, airport, and bus station across the country? Is it no longer a quick route to voter popularity? Has gay-bashing  [more...]

After September 11, one of the changes that everyone clamored for — the general public and law enforcement alike — was the replacement of private security with a federal one. Thus, the TSA was invented  [more...]

Proposition 8 “served no purpose, and had no effect, other than to lessen the status and human dignity of gays and lesbians in California, and to officially reclassify their relationship and families as inferior to those of opposite-sex couples.”

Another poetic ruling. All the rulings so far have been so clear, so simple, so obvious. Which are qualities that are obviously out of reach of bigots.
Download the ruling here.