I’m flabbergasted.
Today my commute to work, which usually takes 45 minutes or so, took only 27.
Every light for the first 14 miles was green. I made it to the traffic circle two blocks from my office in 22 minutes. Then, waiting for the two lights at each block before my office ate up 5 minutes.
I pulled right into a parking space, the elevator was there as soon as I called, and it didn’t stop on any other floors.
Amazing!

Then, I got into my office to find an e-mail from specialguests.com letting me know that Phyllis Schlafly is available for interviews. As the chairman of the Republican National Coalition for Life, she is warning that

… the pro-abortion group Republicans for Choice and the homosexual activist group Log Cabin Republicans have joined forces to introduce a platform plank during the Republican Platform Committee meetings this week that would deeply offend the pro-life and pro-family Republican Party voter base and seriously threaten President Bush’s re-election in November.

She then asks her fellow travelers to imagine the headlines: 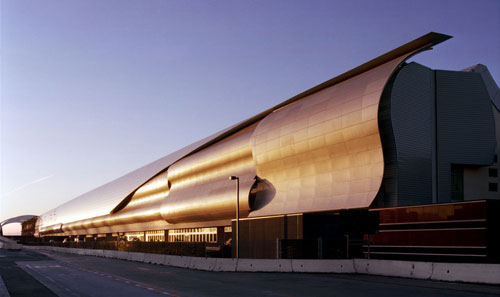 The a la carte airport

I’ve been reading up on the new San Jose airport, which opened today — things like this fascinate me for some bizarre, geeky reason.

Well, well. Now that the Huygens probe has landed, we’re getting a look at yet another planet… dusty and strewn with rocks. You know all those years that “Dr. Who” spent running around in various  [more...]

Because of equal time access rules, now late night television talk shows are opting to not make fun of Schwarzenegger’s candidacy – it seems that too many people get their news from Late Night, sadly, so the  [more...]