We do more before 10 o’clock

Despite over sleeping, I was up and out of the house at 7 this morning for my 30 minute walk. Thirty minutes is longer than I’d expected. Still, the little voice in my headphones — which I call The Voice of the Shoes — urged me on, letting me know how far I’d gone and how much longer I had to go. (Side note: this iPod gadget is quite cool in that it shows off a new capability of the iPod software. It automatically lowers the volume of your music and the Voice of the Shoe calmly interrupts with a status report, then the music returns to full volume. Not jarring at all. But the capability of the iPod to mix two audio sources like that is interesting given all the rumors of future Apple products, including a mobile phone. This software strings together phonemes and words when reading off your time and mileage elapsed; the phone could speak the incoming caller’s name and number over your music instead of pausing it, as the Motorola phone does. But I digress, as usual.)
When I got home, my iPod announced that I’d walked 1.37 miles in 34 minutes… and just as I was about to remove my earphones, what did I hear but Lance Armstrong congratulating me on my longest workout yet! Makes me wonder if Lance knew, when he recorded that, that he’d be congratulating someone for walking only a little over a mile.
Breakfast, shower, and my morning medication, then it was off on the scooter to the farmer’s market. I figured that if I was going to start eating healthier, I could combine that with a “eat local” approach — at least, to a small degree until I start to get used to/enjoying healthy food. First stop was the farmer’s market on The Alameda, in my own neighborhood. Kind of small, sort of lackluster. Still, I got some locally grown organic strawberries and a nice green pepper. I was also kind of hoping there would be at least a few cute guys there, since The Alameda is the closest San Jose has to a gay neighborhood. I guess that I’m the only gay guy around here who gets up so early. Where are the cute, granola-eating-yet-stylish-hunks? Maybe they only exist in my head.
Then, went to the Santa Clara farmer’s market, in the other direction from my house. Many more stalls here, lots of flowers — beautiful orchids for $10 each, but I couldn’t have carried those delicate flowers on my scooter. Really cute guy, in an intense and offbeat way, hawking organic, cage-free eggs which I wholeheartedly believe in and religiously buy… except that I’m avoiding eggs, or at least their yolks, for the time being. Still, didn’t stop me from looking at him from behind my sunglasses.
And now, back home. Feeling much better now, and much less sore although the lump at the top of my leg reminds me that there is a big old plug in my vein and leaning against a counter or something really reminds me.
I have a bunch of work to catch up on but I just feel so ambivalent about it right now. One of the jobs has been sitting around for months waiting for the client to provide materials; they provided them last week while I was recovering; now I sort of feel like it’s my turn to procrastinate in retaliation. But that would be difficult since I need the money.
So, I guess a few hours of relaxing this morning then back to work. Still, I’ve already done more this morning than I used to do all day. 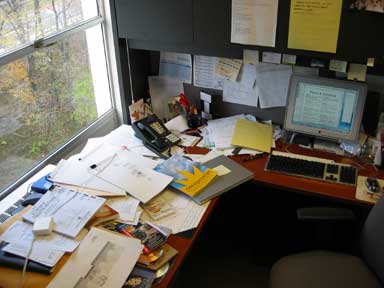 How long will this last?

Is it really a good idea to have a blog - especially one where you will expose parts of your life to public view? And beyond that issue, is it something that I will actually do with any consistency? Will it peter off  [more...]

Revenge of the animals

I’m incredibly squeamish and upset when it comes to hurting animals, as you may have surmised from my post about the ants. Yesterday, the ants were still swarming around my kitchen, so I finally had to take  [more...]

Yesterday I was elated to see that the leaves are starting to appear on my backyard birch trees; and little buds are appearing on the unidentified tree that looks like a weeping willow. Soon I’ll have little  [more...]